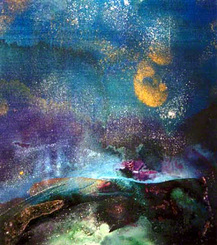 Canadian artist Firoozyves (Firooza Aubry), after completion of her studies, spent several years in Germany where she worked as a foreign-language secretary. It was during this time that she started experimenting with painting on silk and held five solo exhibitions of her work in 1989 and 1990.

In December 1990 she returned to India, where she lived with her husband, Yves Aubry, until their move to Canada in 2009. In India, she worked as a translator, teacher and administrator but art remained an important part of her life and she participated in various collective exhibitions and held solo exhibitions in India, Canada and Germany.

Firoozyves' spontaneous landscapes take you on a journey into unknown worlds and encourage you to dive into a firework of vibrant blues, burnt umber and yellow ochre. The eye travels along cosmic rays which are constantly changing, thus creating mysterious three-dimensional effects, depending on the light and the position of the viewer. Firoozyves does not want to convey a particular message, but encourages the observer to be free in one's own individual interpretation.

It is only through the ease with which her brushstroke travels on the silk that one is still reminded of the fundamental principles of the impressionist. Her originality is documented by an unusual painting style, which has nothing to do anymore with traditional silk painting.

This page and all contents © 2014 Atelier Firoozyves. All rights reserved.